The following defines the local-intake area of  Baldivis Secondary College from 2019: 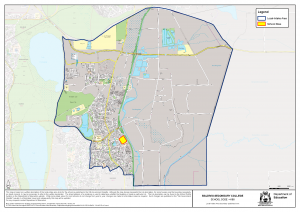